Voyage of the "Canton" (Part I) 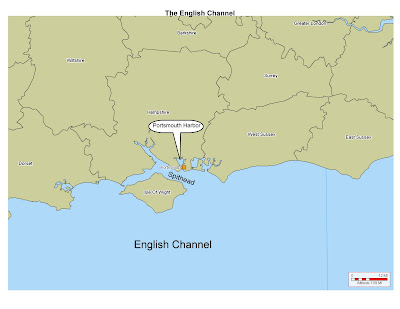 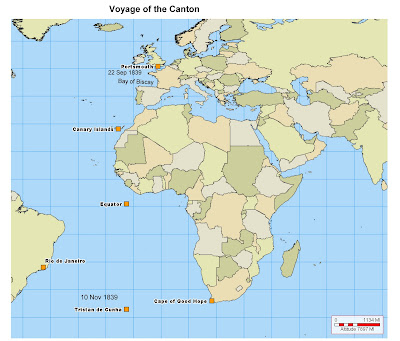 On September 15th, James Gammell, John Grant, Linus Miller, and Jacob Beemer, plus more than two hundred British convicts were received on board the Canton, as Miller described, “with about as much ceremony as would have been shown to as many swine.” One week later, on Sunday morning September 22, 1839, the boatswain called, “All hands weigh anchor!” Miller recalls the departure:

As the sailors manned the windlass and half chanted, half sung, the customary song, so touching and appropriate to the occasion, it seemed to me that the anchor of hope, which held my soul to earth, was being torn from the rock of faith, and confidence in God…The remainder of my days were, perhaps, all to be spent with the outcasts of earth, and friends, and home, and country, never to be enjoyed again, except through the kind offices of memory.(1)

The Canton was not the first British ship to transport convicts to Australia, nor was it the last. From 1787 to 1868 more than 160,000 men, women, and children(2) were exiled under what the British government called “The System” or “transportation.” Rather than build more prisons or fill more hulks to deal with its growing convict population, they had devised a system of human trash disposal that seemed to have real merits. The felon was “mercifully” left alive, and yet he was still completely removed—out of sight and out of mind; thus “transportation got rid of the prison as well as the prisoners.”(3)

The first convict voyage to Australia in 1787 took eight months, spending ten weeks in ports along the way to replenish supplies of food and water. By the time the Canton sailed in 1839, the voyage was faster and safer, and the vessels roomier, relatively speaking, although, from our modern point of view, conditions were still primitive. The Canton would have sailed south toward Rio de Janeiro, flying the red and white pennant that identified a convict vessel. Instead of going as far west as Rio, she landed November 10th at Tristan de Cunha, a tiny island in the South Atlantic, midway between South America and South Africa, to buy fresh meat. From there she sailed nearly 7,000 miles eastward around the cape of Africa to Van Diemen’s Land. The whole voyage took just under four months (112 days), and covered nearly 16,000 miles.(4)

Most convict ships were converted cargo vessels. The hull was as narrow and deep as possible. “This was fine for cargo, but terribly uncomfortable for convicts, as narrow hulls were less stable than beamy ones, and rolled violently.”(5) As soon as the Canton entered the open sea and the sails were unfurled, the seasickness set in. In a short time all but a few of the 240 convicts on board were ill: “Accounts were ‘cast up’ without ceremony, not only on the floor but in the berths; and our apartment was rendered truly horrible. An entire week passed before it would be properly cleansed.”(6)

In general the accommodations were far better than James and his companions had experienced on the Captain Ross. The Canton’s prison quarters were on the middle deck, and the height between decks was a roomy six feet eight inches. The berths, each large enough for five men, were arranged in two rows, each double-height (a berth above and one below) against the hull, with a walkway down the center. At night thirty hammocks were slung in the center space. The only air came from the two hatchways, which were always open, but secured with iron bars. The berths and the floors were kept clean.(7)

Since the early years of transportation the convict diet had been improved, mainly in an effort to prevent outbreaks of scurvy, a dreaded disease caused by vitamin C deficiency, which had killed hundreds of sailors over the centuries. Dr. James Lind discovered the cause of scurvy in 1753, but for many decades thereafter it remained a challenge to provide the necessary fresh fruits and vegetables on a long voyage. Despite a ration of lime juice aboard another convict ship, the Buffalo, some prisoners began to display symptoms:

Our teeth loosened in our heads, and often were so painful as to quite produce delirium. Scarcely a day passed…‘but some one of us had one, two, three or four teeth extracted, and some were obliged to call the doctor from his berth in the middle of the night to extract teeth for them.’ [They] feared they would all be toothless before they reached port. Luckily, the ship [Buffalo] called into Rio de Janeiro to resupply with fresh provisions before the scurvy became life threatening.(8)

Aboard the Canton, James and his fellow convicts were given lime juice, sugar, and vinegar to prevent scurvy, as well as a “daily half-pint of port wine to keep their spirits up.” Each man received a daily ration of ship biscuit (hardtack), salt cured meat, pea soup, and suet pudding, with sweetened tea for breakfast and cocoa for supper. Prisoners were allowed on the deck for fresh air and exercise as often as possible, to prevent the mental and physical deterioration that comes from being chained to a berth for weeks at a time. Convicts were not shackled in chains while the ship was in open water, but they could be chained in emergencies or for punishment. Still there were enough soldiers with loaded guns on board ship to stand guard at all times. During storms, however, prisoners were confined to the hold in the dark, holding fast to anything stable to keep from being thrown about with the rolling of the ship.(9)

As the Canton passed the Bay of Biscay and the Canary Islands, and neared the equator, the heat became “almost insufferable.” The air was stifling and the sun blazing hot: “There was only one word spoken or thought—one yearning idea in every mind—water.” Three pints a day were allotted to each convict—three pints of “putrid and blood warm” water. Still it wasn’t enough, and some men became half deranged from thirst.(10)
_________________________
Posted by Liz at 5:31 PM

Add comment
Load more...
Newer Post Older Post Home
Subscribe to: Post Comments (Atom)
"All that we can know about those we have loved and lost is that they would wish us to remember them with a more intensified realization of their reality. ... The highest tribute to the dead is not grief but gratitude." - Thornton Wilder