The presidential election of 1860 caused quite a commotion in the state of Texas.  The new Republican Party had nominated abolitionist and former congressman from Illinois, Abraham Lincoln.  His very name became a curse word to Southerners.  So strong was the opposition in Texas that he was not allowed on the ballot. When Lincoln won the election with nothing but Northern electoral votes, Texans realized that their economy and their very way of life were in jeopardy.  They began hollering, “Immediate secession! Abe Lincoln is not our president!”(1)
The whole Southern economy was based on the belief that slaves were property and that the government had no right to confiscate personal property—and valuable property at that.  In Texas one adult male slave was worth nearly $1,000, and slaves were absolutely essential to running a cotton plantation.
Even non-slaveholders, like Andrew Gammell, felt the same way.  Only one person in ten owned a slave, but nine out of ten would support the war of secession.  Andrew told his sister, Jane,


I hope the day is not far distant when you all can welcome home the victorious soldiers of Texas.  How I look for that happy day when I once more can see my friends and know them free from Lincoln and his despotic rule.  Then I shall be satisfied…I do not care how soon [the Northern states] may fall out if they will let us alone.(2)
Andrew, along with his fellow Texans, was willing to risk his life in the defense of the South and its traditions, even though he had lived in Texas for less than five years.  Originally a Northerner, he was born in New York.  He was christened “Andrew Faulds Gammell”(3) at age twelve in Lowell, Massachusetts, while living there with his mother and his stepfather, James H. Wylie.  The family then moved to Hanover, Michigan, to be near his brother James Gammell after James had escaped from Van Diemen’s Land.  In Hanover, twenty-one-year old Andrew married Esther Van Patten, the sixteen-year-old daughter of his neighbor John Van Patten.(4)  Andrew and Esther had two daughters, Jennette and Esther, before leaving Michigan.
By 1860 most of the Gammell family, with the exception of James, had gathered in Harris County, Texas, where the oldest brother, William, a slave owner, had lived for more than twenty years.  William had been part of the contingent that won the original Republic of Texas from Mexico in eighteen minutes at San Jacinto.  Andrew and his sister, Jane, the wife of Captain James B. Andrews, settled in Harris County, along with their mother, Jane Wylie, and their stepsister, Mary Ann Wylie, who married a Texan, Darius Gregg.
Andrew and his brother William, both gunsmiths by trade, must have paid close attention to the heated arguments during the presidential campaign.  They realized that such animosity between the North and South was bound to end in war.

Just one month after Lincoln’s election, South Carolina seceded from the Union, citing the violation of its alleged rights to own slaves.  Texas followed suit a few weeks later on February 2, 1861.  On February 8, seven cotton states met in Montgomery, Alabama, to organize the Confederate States of America.  They named Jefferson Davis as President.  In April Davis ordered six thousand Confederate troops to take Fort Sumter. Shots fired at 4:30 in the morning on April 12, 1861, marked the beginning of the Civil War.  The sixty Union soldiers who manned the fort surrendered the next day, marching out of the fort bearing the tattered Union flag.

During the summer the Confederacy began organizing its defensive fortifications in Texas.  The Union battleships in the Gulf of Mexico now posed a threat to the shipment of Texas cotton to England.  Colonel John Creed Moore was sent to Galveston, where he organized and trained the Second Texas Infantry Regiment, known as the Second Texas Sharpshooters.  Andrew Gammell of Houston was one of the volunteers who enlisted.  By December the regiment, consisting of ten companies of volunteer militia, had moved to Camp Bee near Andrew’s home in Houston to complete their training.  By March 1862, Andrew had been transferred to Corinth, Mississippi, where his regiment became part of the Army of the Mississippi, commanded by none other than General Albert Sidney Johnston, former commander of Utah’s Camp Floyd.

With courage and youthful optimism Andrew bid a tearful farewell to his wife, “Het” (Esther), and his three daughters.  The youngest was three-year-old Kate.  He called her “Kitten.”(5)  Andrew took comfort in knowing that his sister, Jane, lived nearby and would be a great help and support to Het while he was gone.  (Andrew’s mother, Jane Wylie,  had met an untimely death just a few months earlier when she was struck by lightning.) After a festive ceremony in which the ladies of Houston presented the regiment with a silk battle flag, Andrew and his fellow soldiers departed Houston by train to Beaumont, Texas. From there they continued by steamboat and overland march to Corinth, Mississippi.(6)

As part of the greater Army of the Mississippi, Andrew and his fellow Texas Sharpshooters engaged in one of the bloodiest battles of the Civil War at Shiloh, Tennessee (April 6-7, 1862), the battle in which General Albert Sidney Johnston was killed.  Johnston was shot in the leg while leading the attack on the Union army.  Thinking that his wound was insignificant, he dismissed his personal surgeon to care for other wounded soldiers.  Within one hour he bled to death; his boot had filled with blood from a severed popliteal artery.  After the battle the Second Texas was cited for bravery, and Colonel Moore was promoted to brigadier general.

By the time the Second Texas, now under the command of Colonel Ashbel Smith,(7) fought the battle at Corinth, Mississippi, in October, they had already become a seasoned fighting unit.  They managed to take Fort Robinett, but held it for only a short time and were forced to retreat.  From Corinth the regiment retired to winter camp at Grenada, Mississippi.  On Christmas Eve, President Jefferson Davis and General J. E. Johnston came to review the troops.  The dignitaries watched the parade from the porches of the mansions along Margin Street, while the troops marched from the fairgrounds to the downtown square to Margin Street, and then back to the fairgrounds.(8)

Andrew, still in good spirits and steadfastly optimistic about the Confederate cause, reported the news to his family, “I had the pleasure of seeing Jeff [Jefferson] Davis at Grenada.  He and General [J.E.] Johnston reviewed the army at that place… The army was very much pleased with him and cheer after cheer was sent up for him.”  In his letter Andrew had very little to complain about, except maybe the food and his aches and pains from sleeping on the cold ground:

My health is very fair at the present time, all but the rheumatism, which has bothered me for these last six weeks.  But I have a good appetite, as you would find if you could set me down to one of your old-fashioned dinners.  Whew, what a treat that would be for the soldiers now Jane!  I think from what I can hear that this spring [1863] will fetch the war to a close…That was great news we heard the other day [concerning] the recapture of Galveston… Fight them to the last is my motto.  Or as the gallant Lawrence said, “Never give up the ship!”  We have them on the downhill so that now if we follow them up it is soon over.(9)


The victory at Galveston (January 1, 1963) gave most Texans reason to be optimistic about the outcome of the war.  Galveston was the largest city in Texas at the time and its major seaport.  Confederates took back Galveston from Union occupation and retained it for the rest of the war.  The Union never tried to retake the island, but it reinforced the blockade in an effort to limit commerce in and out of the harbor.

As the Civil War was nearing the end of its second year, Andrew wasn’t the only one who was predicting that it would end soon.  Even General Ulysses Grant supposed that one final battle would bring the war to a close.  Hopefully that final battle would not be as costly as Shiloh.  The two-day battle of Shiloh was the costliest battle in American history up to that time, resulting in the defeat of the Confederate army and 10,699 Confederate casualties (1,728 killed, 8,012 wounded, and 959 missing or captured).  Union casualties were 13,047 (1,754 killed, 8,408 wounded, and 2,885 missing).  The dead included Confederate general Albert Sidney Johnston and Union general W.H.L. Wallace.  Both sides were shocked at the carnage.  Little did they know that “three more years of such bloodshed remained in the war and that eight larger and bloodier battles were yet to come. The war would continue, at great cost in casualties and resources, until the Confederacy succumbed or the Union was divided.”(10)
__________________________
Posted by Liz at 11:58 AM 2 comments:

Liz, on Tuesday afternoon Jan and I had a nice visit in Sheridan with our cousin Sandra Baril.
She showed us some locations related to Grandpa James that I wanted to share with you.  We first drove a short distance east of town to the likely area where James first settled and started the saw mill, Mill Creek.  The exact location is no longer identified.

After leaving the saw mill, James and wife Susan Maria Brown homesteaded west of town.  The land is now owned by 5L Ranch. 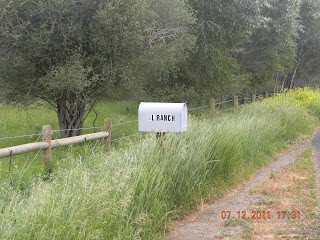 Going west and south is the Duncan property where it is believed James built this barn.

The cemetery where James is buried is 1.5 miles south of town. 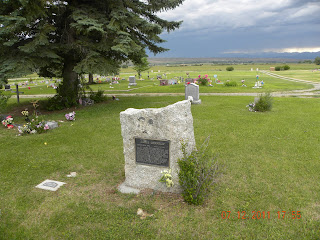 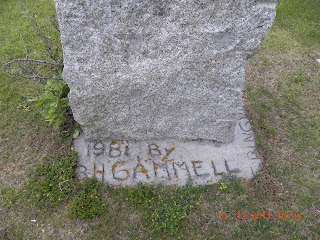 After leaving I asked Sandra to go back so we could take a picture of two of us at the grave marker. 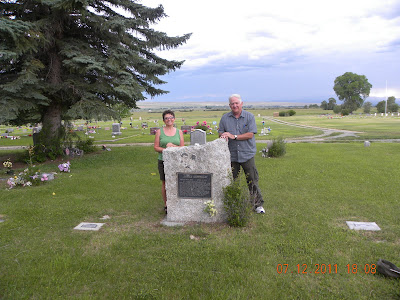 In backtracking we also came across the grave of Orlin Gammell, James’ first son. 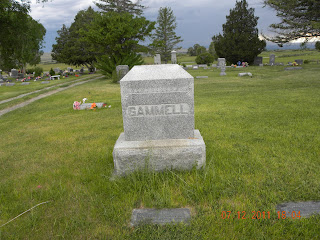 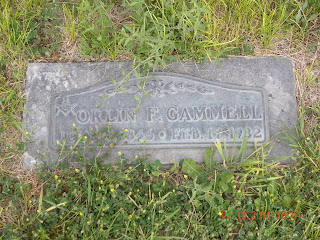 When Jan was taking the picture of Sandra and me, I threw my cap on the ground. After getting back in the car I realized I forgot my hat. In going back to retrieve it I then noticed other grave markers next to James’ grave. Susan being Sandra’s great-great grandmother and I believe sister-in-law of our great-great grandmother Hannah Jane. 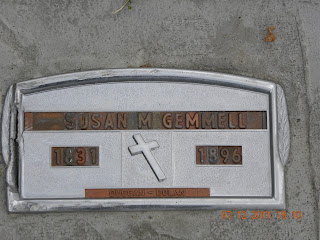 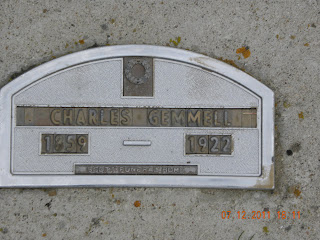 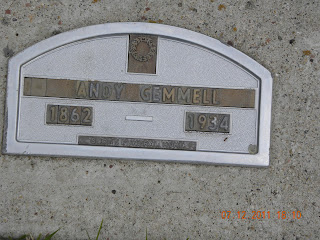 Photos by Bary and Jan Gammell
Posted by Liz at 7:37 PM No comments:

Newer Posts Older Posts Home
Subscribe to: Posts (Atom)
"All that we can know about those we have loved and lost is that they would wish us to remember them with a more intensified realization of their reality. ... The highest tribute to the dead is not grief but gratitude." - Thornton Wilder