Valley of the Great Salt Lake

At the trapper’s camp in Cache Valley, Utah, Jim Bridger built a bullboat out of thick willows woven into a basket with buffalo hide stretched over it.  He used it to settle an argument about where the Bear River ended.  Bets were laid, and Bridger set off down the river in his leather tub.  At the mouth of the Bear he discovered a great body of water.  The water tasted like brine! When he returned to camp to relay the news to the other trappers, one of them exclaimed, “Hell, Jim, you done found the Pacific Ocean!”  It was fall 1824, and Jim had actually discovered Great Salt Lake.  “Jim always felt peculiarly possessive of Salt Lake Valley. No wonder.  He had found it; he loved it; it was his!  It might well have been called Bridger’s Hole….”(1)


On July 24, 1847, the Mormon pioneers claimed the valley that Bridger loved so well.  Brigham Young was ill with mountain fever when his wagon company emerged from the mouth of Emigration Canyon.  Here they stopped, and Brigham arose from his sick bed to survey the valley below.  After several minutes he said, “It is enough. This is the right place. Drive on!”(2)   An advance company of pioneers had entered the Salt Lake Valley two days earlier on July 22, and had started immediately to create a crude irrigation system and prepare for planting.

In 1847 James Gammell had no connection whatsoever to the Mormons or to their exodus from the United States, but he would soon find himself a participant in the establishment of the State of Deseret,(3) as Brigham Young called the Great Basin:


The Saints(4) were virtually the only white settlers in the vast Great Basin, the name for an area about the size of Texas between the Rocky Mountains on the east, the Sierra Nevadas on the west, the Columbia River drainage on the north, and the Colorado River drainage on the south. The area was relatively isolated and arid and short on timber and game. The Saints realized that settling here would require considerable faith and their best efforts, but they believed that with God’s help they could succeed.(5)

James visited the Great Basin area several times between 1843 and 1849.(6)  Upon his return to Spring Arbor, Michigan, after one of his trapping expeditions, he learned that his wife, Harriet, was ill.  We don’t know if he was at her bedside when she died, or if he arrived later, only to be told the tragic news of her death (August 20, 1848.)   But now, dealing with a burden of grief, he was anxious to be on the move again.  Early in 1850 he left his three-year-old son, Orlin, in the care of Harriet’s parents and headed west, this time arriving in Great Salt Lake City.


James must have been successful in finding employment among the Mormons almost as soon as he arrived in the valley.  Perhaps Brigham Young had met him and become aware of his skills during one of James’ earlier expeditions from Michigan.  In any event, not long after his arrival he negotiated a contract with Brigham to dig 100,000 rods (312.5 miles) of ditch at one dollar per rod.(7)   Making a ditching machine, probably like the one he had referred to while in Van Diemen’s Land, he was able to finish the contract.  James has been given credit for other public works during this period, such as building the bridge at Ogden and one across the Jordan River, and inaugurating the planting of trees in the valley.(8)


The year 1850 was an eventful one in the growth and development of the Salt Lake Valley, as well as in the life of James Gammell.  Although we have no details about his conversion, James made the decision in 1850 to become a member of The Church of Jesus Christ of Latter-day Saints.  In August he was baptized by Apostle Parley P. Pratt.  A short time afterwards James also received the priesthood, and was ordained to the office of a Seventy by E. [Ezra] T. Benson.(9)  (See note below for an explanation of the Mormon doctrines of baptism and priesthood.)


In September 1850 the United States Congress formally established the Territory of Utah and appointed Brigham Young as governor.


On September 14, 1850, “Daniel H. Wells moved that the Supervisor of roads be instructed to proceed forthwith to improve the streets and roads, by making ditches, turnpike roads, and making good and sufficient bridges, aqueducts, &c…and that he employ Mr. Gammel [sic] with his improved ditching machine and scraper, to work under his direction upon the public works…”(10)


On Saturday, October 5, 1850, “The General Assembly of the State of Deseret met at the Bowery, Great Salt Lake City, pursuant to adjournment… The resignation of Robert Pierce as Supervisor of roads was accepted, and Mr. Gammell appointed in his place.”(11)


Note:  Baptism is a sacred, saving ordinance in which one follows the example of Jesus by being baptized by immersion in order to “fulfill all righteousness” (Matthew 3:15.) It is a covenant or promise with God to accept His Son Jesus Christ as the Redeemer, and to obey His commandments. If a person honors this sacred covenant, God forgives his sins, and he is cleansed from all unrighteousness. First, a person is baptized by being lowered under water and raised again by a one having authority from God to do so. This action symbolizes Jesus’ death, burial, and resurrection, and it also represents a willingness to live as true disciples in obedience to God’s commandments to the end of one’s life. Following baptism, a person is confirmed a member of The Church of Jesus Christ of Latter-day Saints, and receives the gift of the Holy Ghost. Priesthood authority, the same that existed in the original New Testament Church of Jesus Christ, is the authority and power to act in God’s name for the salvation of all God’s children. It is delegated or conferred, also by the laying on of hands, upon all worthy male members of the Church over the age of twelve. (See http://www.mormon.org/ )
_____________________________

Dr. John C. Carter, Museum and Heritage Advisor for the Ontario Ministry of Tourism and Culture in Toronto, is an expert on the Canadian Rebellion, and has done extensive research in Tasmania.

On August 13, 2010, he published an article about James Gemmell in an online magazine called Thousand Islands Life:

I encourage the Gammell/Gemmell clan to leave comments at the end of the article.


Another excellent website, Rebels and Raiders by Shaun McLaughlin, mentions James Gammell at the end of the following article, and refers to The James Gammell Chronicles under "Further Reading":

http://www.raidersandrebels.com/2010/06/benjamin-wait-samuel-chandler-2.html#more
Posted by Liz at 8:50 AM No comments:


We are part of the Montana bunch of James's offspring.  We live in southwest Montana in Gallatin Gateway, near Bozeman, and we operate a ranch on the Yellowstone River north of Yellowstone Park. 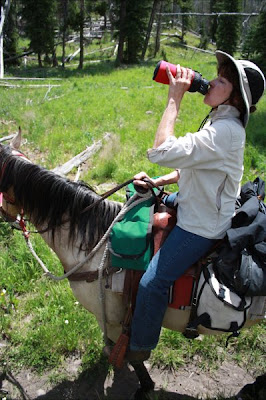 My daughter Anna and I just spent eight days on horseback exploring part of the route that James and Jim Bridger took in 1846 through the area that is now the remote southeast corner of the Park.  James described the trip to Wheeler as starting in the Jackson Hole area and traveling north into what we now call the Thorofare River-Yellowstone River confluence.  We rode the entire Thorofare-Upper Yellowstone Valley and went over the divide into the Snake River headwaters that James came into with Bridger.  We came out of the backcountry at the South entrance to Yellowstone National Park, loaded our stock and drove home to the ranch on the road along the west of the lake.  James did the whole trip on horseback, of course, passing by what is now our ranch, north of Mammoth, and on to "Benson's Landing" which is now Livingston, Montana, on his way to the Big Horn. 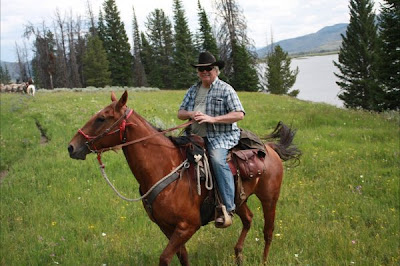 Needless to say, we talked a lot about how we were riding the same drainages that James had traveled.   Thanks to the National Park Service, the country looks very much as it did in 1846, except the trails are much better. 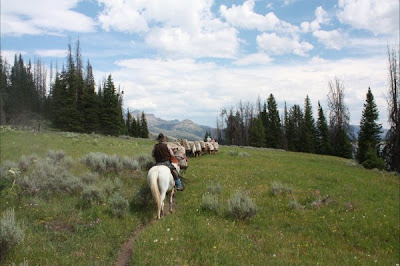 I have been an outfitter and guide in the Park, and I think James probably followed the Snake from Jackson Hole to what is now the vicinity of the South entrance of the Park, then followed the river up to its origin at Mariposa Lake, high on the western side of the Continental Divide, where you can step across the river.  From there it sounds like they crossed the divide, dropped into the upper Thorofare River Country, and probably followed the Yellowstone to the Lake and went back west, over the divide again and up the West side with an excursion to the geyser basins at the head of the Firehole River which runs into the Madison. 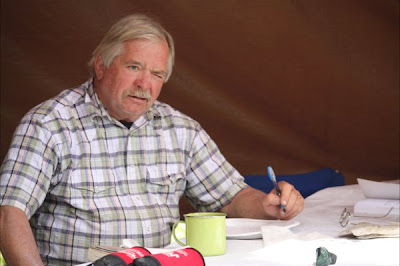 Moving through the mountains in 1846 had to be a tough way to travel, as there was no government to cut out the trails.  He mentions a trail along Snake Lake, which must have been a combination Indian, trapper and wild game trail.  It is still there today.  It must have been a hell of a trip through paradise. 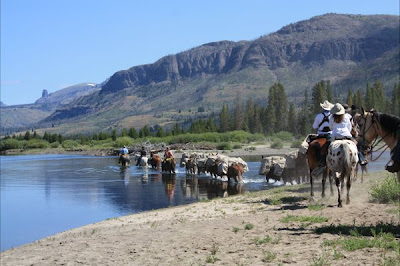 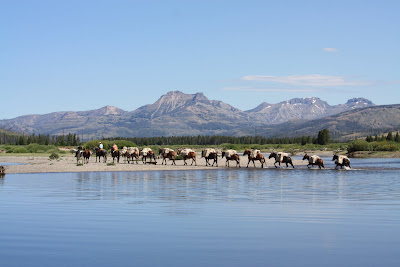 I wanted to contact you and thank you for the Chronicles.  James was my great, great grandfather.  His daughter Jeanette (Duncan) was the mother of my Grandmother Hazel, who married Charlie Brown.  Their daughter Jane was my mother.
Dick Kendall
Gallatin Gateway, Montana

See Anna's website for all seventy-five Thorofare Photos:
https://cid-0860f55303d29bcd.photos.live.com/play.aspx/Thorofare%20Pictures?Bsrc=Photomail&Bpub=SDX.Photos
Posted by Liz at 9:22 AM 2 comments:

﻿﻿﻿This is one of the most exciting finds of the last fifty years... a second photograph of James Gammell!  I was convinced that only one photo of James existed, until I discovered this one just yesterday on Sandra Baril's website.  (Sandra is a descendant of James' daughter Jeanette. )
Thank you, Sandra, for sharing it!   I hope to find out more information concerning the photo.
Posted by Liz at 7:20 AM 1 comment:

Newer Posts Older Posts Home
Subscribe to: Posts (Atom)
"All that we can know about those we have loved and lost is that they would wish us to remember them with a more intensified realization of their reality. ... The highest tribute to the dead is not grief but gratitude." - Thornton Wilder