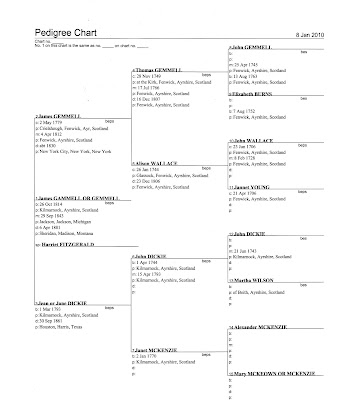 The county of Ayr was a hotbed of religious turmoil during Scotland’s Convenanter uprising, and the Gemmills were often at the center of the struggle. Family tradition indicates that the Fenwick Gemmills were staunch Covenanters. The term Covenanters refers to those Scots who signed the National Covenant (1638), a document that reaffirmed the Presbyterian faith and ritual, and the separation of church and state. In refusing to accept the royal decree that King Charles was the spiritual head of the Church of Scotland, they were, in effect, signing their own death warrant.
At Edinburgh, 60,000 Scots signed the Covenant, and copies were taken throughout the country for more signatures, “bringing the Scottish Kirk into direct conflict with the King and the rule of law.” Daniel Defoe estimated that during the fifty-year struggle 18,000 Covenanters were put to death for their beliefs. The period from 1680 to 1685 was one of the fiercest in terms of persecution, and a few months between 1684 and 1685 became forever known as the “Killing Times.” Charles’ brother, James II, had come to the throne. As a believer in the Divine Right of Kings and a supporter of the Roman Catholic faith, “it became his sworn intent to totally eradicate the Presbyterians.”(1)

At least two Gemmills gave their lives to the Covenanter cause. John Gemmill was killed along with Richard Cameron at Airsmoss on July 20, 1680. Then in 1685, dragoons captured twenty-one-year-old Peter Gemmell. Without any trial they led him a few yards into the corner of a field on Midland Farm, Fenwick, and shot him dead. (See gravestone inscription in the previous post.) That same year another John Gemmell and eleven other Covenanters were holding a prayer meeting one evening at a farm in Fenwick Parish. While they were on their knees in prayer, a party of soldiers burst open the door. One of the Covenanters, James White, was shot dead. John Gemmell was attacked, but he wrestled the bayonet from the soldier’s grasp, thrust it into his body, and escaped into the darkness. The next day the soldiers cut off the head from James White’s dead body and used it as a football for their sports at the town of Newmilns.(2)

Another recorded incident involved William Dickie of Kilmarnock (possibly a progenitor of James Gammell’s mother, Jean Dickie.) A group of nine soldiers, searching out suspected Covenanter sympathizers, were quartered in Dickie’s house for six weeks. He was required to house and feed them for nothing. When they finally left, they stole his possessions and his money. They also thrust a knife into the side of his pregnant wife and left her to die. They beat William, breaking two of his ribs. (3)

This bloody period of Scottish history finally ended in 1689 when William of Orange and his wife Mary (daughter of King James II) jointly acceded to the throne of England, after a non-violent revolution that forced James II into exile. King William was persuaded by his advisors to accept Presbyterianism as the Church of Scotland, thus ending fifty years of persecution against the Covenanters.
________________________________
Posted by Liz at 3:22 PM

Newer Post Older Post Home
Subscribe to: Post Comments (Atom)
"All that we can know about those we have loved and lost is that they would wish us to remember them with a more intensified realization of their reality. ... The highest tribute to the dead is not grief but gratitude." - Thornton Wilder